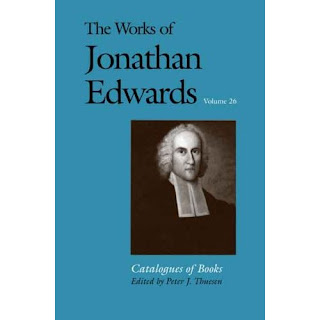 Just the other day I received my review copy of the final volume of the Works of Jonathan Edwards. The volume will not be officially published until next month. As noted in an earlier post, this book marks the end of an era. Freedom of the Will, the first volume in the series to appear, was published by Yale University Press in 1957. The Yale edition of Edwards’ Works has taken 51 years to come to completion and has seen three general editors: Perry Miller, John Smith, and Harry Stout. For many years we saw no progress in the publication of volumes in the set, for various and sundry reasons. But in the late 80s and early 90s we saw the series take on a life of its own as volumes seemed to literally pour from the press. And now, what was once only a far-fetched dream in the mind of a Harvard American literature scholar, has now come to full fruition. God certainly had a sense of humor in using a Harvard atheist to promote the cause of perhaps the most non-Atheistic American who ever lived. Miller, who did not care for Edwards’ Calvinism, thought he could slice and dice Edwards and present him to the world to be examined and admired for his philosophical ingenuity. But Edwards would not allow that. Interestingly enough, it is Edwards’ sermons and other exegetical efforts that are catching the spotlight of late. And that is just as well. There are many of his sermons that are gems and his commentary on Scripture is fascinating indeed.

Yes, the end of one era has arrived. The letterpress edition of Edwards’ Works stands complete. But in another sense, the work of Edwards continues. And what work is that? The work of proclaiming the gospel of Jesus Christ to a lost and dying world and of building up the saints in godliness. That work will continue until our Lord returns.